June was a busy month at our Grange.  Dale Rusho put together a team of volunteers to sand and refinish our hall’s maple floors early in the month and they did a grand job!  Thank you to Kurt Lucke, Maynard Rucker and Gene Muren for your hard work and to Dean Evans for providing the material used on the floors at a great savings.  And thank you to Sally Gililand for bringing lunch for the guys, it was much appreciated!  Most especially we want to thank Dale.  He spent many hours up at the hall and his planning and hard work saved us over $2,000!

Also in June, Kurt and I travelled to Ocean Shores to represent Swauk-Teanaway at the annual WA State Grange Convention.  One thing I was really proud of was that our Grange submitted a resolution this year, the first in several years, and it was adopted by the delegates!  We received an award for new members gained in 2012 and we won a Kindle Fire HD in a raffle sponsored by the state Membership Committee.  As you can see from the photo above, we were a colorful group! 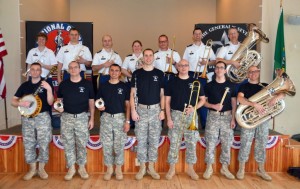 Members of the 133rd Army Band

We celebrated Grange Month in April by hosting the 133rd Army Band’s Brass Patriots and General 7 Dixieland Jazz groups in a free concert, complete with homemade desserts available for a donation.  Thanks to Carel Edgerly and Kathy Weber, and all who baked and helped out, as well as all who came and filled our hall with an enthusiastic audience!  Our community events start again in the fall.  Check our website for upcoming events: www.swaukteanawaygrange.com

There are no upcoming events.

Visit our Photo Gallery for more great images like the one above.

Recent News from the National Grange